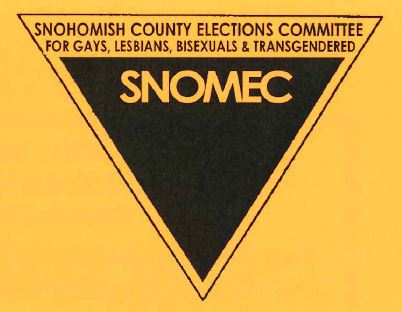 In 1999 the Snohomish County Elections Committee (SNOMEC) was co-founded by Charles Fay, Pat D'Willis, and Jeff W. Phillips. SNOMEC conducted face to face interviews with candidates for public office to assess their knowledge of and commitment to issues of importance to their GLBT (now LGBTQ) constituents.

From these interviews, rating sheets were prepared, mailed to voters, and distributed widely in every public library in Snohomish and Island counties. Through the interview and evaluation process, SNOMEC not only sought to inform voters, but also to prompt candidates to openly discuss issues that were not well understood by the public. 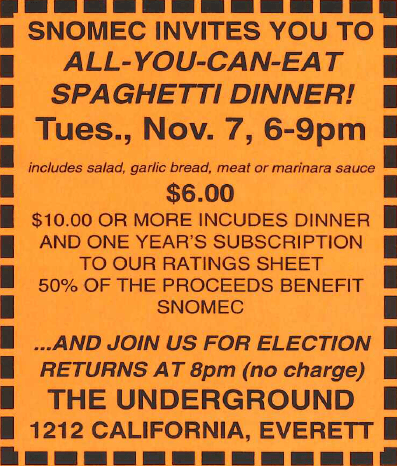 During SNOMEC's period of operation, Fay, D'Willis, and Phillips were involved equally with managing its activities. Fundraising, preparing questionnaires, assembling and training panels of interviewers, securing interview locations, scheduling sometimes reluctant political candidates, and mailing out the rating sheets, were all time-consuming and required a significant amount of support. These efforts were made possible by the work of a large contact list of enthusiastic volunteers.

Despite having an active volunteer pool, there was a shortage of individuals interested in assuming leadership roles within SNOMEC as its work progressed. There was a desire among the original leadership to hand oversight of the Committee to a new set of organizers. In June of 2003 it had become clear that SNOMEC would not have the level of organizational support needed to complete that year’s ratings sheets, and a letter was sent asking for volunteers to take up the mantle for the 2004 elections. Shortly after, SNOMEC ceased its candidate rating activities. SEAMEC, a Seattle-based Committee from which SNOMEC received guidance and support, is still in operation.